Save the Internet Cafes Campaign

One of Urban Voice’s previous and most successful campaigns to date was the ‘Save the Internet Cafes’. This campaign came about due to the Ministry of Post and Telecommunications (MPT) issuance of Circular No. 1815, requiring the closure of all internet cafes within 500 meters of schools.

Through the use of crowdmapping, Urban Voice was able to identify all of the internet cafes in Phnom Penh along with all of the schools. The corresponding map illustrates how greatly impacted the capital alone would be by this circular. Five hundred meters from a school ensures that just about every part of Phnom Penh would be affected.

Adversely affected that is. Not only would numerous businesses be forced to close, but the supporting industries such as computer repair shops, internet providers, the electricity company and landlords would all be affected due to the loss of income. Ordinary people wouldn’t be able to gain access to the internet either or a computer for other work they may need to do.

The circular may have been introduced with the idea of protecting school children from the scourge of the internet and all that is available online by limiting access to computers. Problem is, in Cambodia the vast majority of the populace uses their mobile phones to gain access to the internet. Yet the circular did not seek to close mobile phone networks around schools or ban their use in and around them. Safety and the obvious impact of restricting phone access in and around schools are reasons enough not to even consider drafting a circular to ban mobile phones.

The fact is though that a circular was drafted and implemented to restrict internet access. It was also done without clear evidence for its need or its impact. Protecting children is all well and good, definitely a worthy cause, however it’s not reason enough for the creation of new regulations that inhibit freedoms, business and access. This is especially true when no direct causation has been provided, or even supporting evidence that demonstrates a correlation.

Understanding the potential impact of the circular, Urban Voice’s team along with a number of civil society partners, such as Licadho, sought to map all the locations of internet cafes and compare them with the location of schools. To do this required far more manpower than Urban Voice or any of its partners had collectively. The solution, and one which Urban Voice is all about, was the crowd.

The crowd is you. The crowd is anyone and everyone living or working in Phnom Penh. Turning to the populace of the capital means that Urban Voice can cover far more ground far more quickly. Collecting that data is known as crowdsourcing, and the map generated from such data is known as a crowdmap. Without you, Urban Voice couldn’t have produced the map that unequivocally proved how unimplementable Circular No. 1815 was.

And we got results: on Dec. 21, 2012 Telecommunications Minister So Khun announced that the government has no plans to close any internet cafés, and instead encourages them to open. 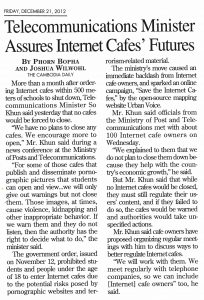 The success of the ‘Save the Internet Cafes Campaign’ was heartening to us here at Urban Voice. Which is why we plan to bring you more campaigns, such as our current ‘Blackouts’ campaign about the power outages that Phnom Penh and Cambodia are currently suffering. Together with you, Urban Voice can make a difference and help improve the city we all call home. To find out more about our campaigns, just click the link in the menu bar at the top of the page.

Campaigns aren’t the only information we’re interested in, so be sure to check out the Map. There you’ll find a slew of categories that the Urban Voice team is tracking. With your help we can do so much more. So take a gander and get a feel for what we’re doing, then submit a report or two about the issues in your neighbourhood, school or place of work.

Power Cuts are BACK.